Zaski… A Hope That Was Lost 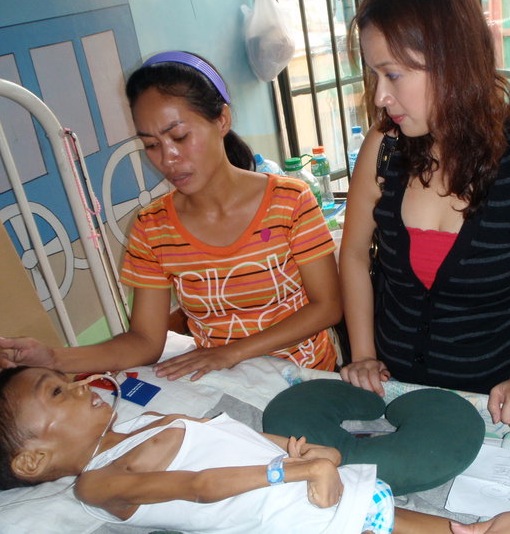 Ever since Arnel Pineda personally picked the case of Zaski John Angelo R. Lopez, APFI has committed itself to help this 4-year old kid from Ibaan, Batangas battle the disease that has left him crippled for nine months now.

Thus, APFI facilitated the immediate transfer of the boy from his home in Batangas to the National Children’s Hospital on September 22, 2010 where he had undergone extensive medical tests and procedures. His CT SCAN result reads:

There are patchy small low density changes in the temporo-parietal cortices as well as in the right thalamus.

A well defined low density focus or malacia is seen in the left thalamus.

There is a low density subdural fluid collection over the left fronto-parietal convexity measuring about 0.5 – 1.0 cm. in thickness.

There is no midline shift. No abnormal area of contrast enhancement is noted.

The calvarium and basal structures are intact. The sutures are not widened.

Based on this result and his X-Ray result that reveals an untreated hypothetic pneumonia resulting from his prolonged bedridden condition, his attending neuro specialist, DRA. CAPILI of the NHC, has recommended a series of treatments including:

Intravenous Penicillin management for 7 daysIntravenous Antibiotics (Metronidazole, Textriaxole, Oxacillin) for 6 weeks to treat his SUBDURAL EFFUSION (puss and water in the brain, which is a likely complication of meningitis and hydrocephalus)

After all these are done and complications have been treated, Zaski will be referred to NEURO SURGERY for a possible VP Shunt. This procedure is expected to drain the water from his brain.

Unfortunately, the father of Zaski, Mr. Johnny Lopez, saw the discomfort of this long treatment and decided to just bring his son back home in Batangas.

APFI tried to convince the father to just let Zaski stay in the NHC for the treatments but the parents may have their own personal reasons for deciding against it.

APFI is saddened by this but we cannot impose on the parents. APFI is just here to assure them that through all these, we will be of help.

And so, on September 25, Saturday, with sadness, we bid goodbye to Zaski. His parents brought him home, back to where they believe he will be better.

It was not a mission accomplished, but something taken with great courage and compassion.