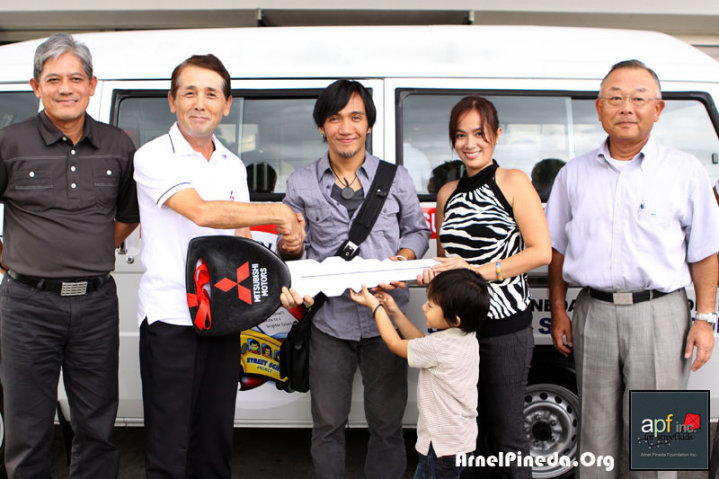 APFi wishes to extend its profound thanks to MITSUBISHI MOTORS PHILIPPINES CORPORATION (MMPC), through its President Mr. Masahiko Ueki, in partnership with Ms. Yumiko Hara, for supporting the charitable advocacies of APFi. The L300 Van donated by MMPC through the help of Ms. Yumiko Hara is now being used by APFi as an additional mobile school for street children. With this great contribution, APFi can now reach out to more out-of-school youth in the Philippines. APFi also wishes to mention the special contribution of Isabel Lourdes Jundis of MMPC for her efforts in facilitating the ceremonial turnover of the van.

Gracing the formal turnover ceremonies was Mr. Arnel Pineda himself, together with the other members of APFi; namely: Cherry Flores-Pineda, Ferdie Arquero, Tessang Bautista & Miles Casala. Said momentous event was also highlighted by a tree-planting activity jointly conducted by the officers and members of MMPC and APFi. In gratitude for the benevolence of MMPC, Mr. Arnel Pineda, capped the event with a heartfelt song by Bryan Adams entitled “Everything I do, I do it for you.”

APFi also wants to thank everyone who contributed one way or another in making this donation possible.