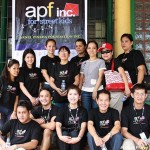 Arnel Pineda Foundation Inc. completed a successful roll out of Misyon: Kalusugan at National Children’s Hospital on July 10th, 2010. In attendance and assisting in the mission were APFi Board Members and volunteers. With the help of donors including Natrapharm, health education and health/medical staples were distributed to ill children and their families.

Volunteer Will Mallari shares a recap of the day at NCH:
It didn’t take long for the AFPI to return to the National Children’s Hospital in Quezon City. In an expanding APFI campaign of charity outreach, the children of the NCH remain a point not lost. Not long after a night of laughter and togetherness, Cherry Pineda and the APFI made an effort to extend the merriment of her birthday on location. In truth, in just having known Cherry for a relatively short time, it has been significant and it doesn’t hurt to say that I believe the subsequent is an honest summation of what she’s about: Getting things done. And that means enacting her priorities with the APFI agenda and not deviating from that playbook. I’ve observed now both Cherry and her husband, if together or apart, enact their mission and admire the pair for sheer effort, leadership and insight. Misyon Kalusugan is exemplar.

On Sunday, July 10, 2010, following the tandem of Cherry and Tessang, it’s a reunion of sorts beginning with a familiar face. Dante Riello was content to postpone lunch when Cherry and Tessang entered the room. I think there are connections that actually grow stronger when apart and in this case it seems absence truly made the heart grow fonder. How wonderful it was to see Dante again. The boy who must bear the daily brunt of recovery continues to show accelerated improvement. I’m convinced he’s kicking hard for the finish line. For more than 9 months Dante has been fighting pain while enduring treatment after treatment, medication, prognosis after testing, session upon session; and for 9 months he has not disappointed himself.

On May 18, 2010, Dante underwent a “CBC” blood exam. Later that same day, he endured a blood transfusion for the purpose of maintaining his blood platelets. Fast forward to June 22, 2010 for the same exam procedure and diagnosis. July 8, 2010 Dante received 2 units of platelet concentrate and on the very same day had to endure another tracheotomy, better a replacement, because of an infection around the opening. On Wednesday, July 13, 2010 Dante is scheduled for a diagnostic CT scan. Though the inflammation has subsided, there remain infections in and around the cheek, nose, eyes, and ears. The diagnostic will be done at Jose Reyes Memorial Medical Center San Lazaro Compound, Rizal Avenue, Sta. Cruz, Manila. These are necessary prelims to Radiation Therapy. For now we’re in stand-by mode. Pending prognosis of these tests, Dante will begin what we hope to be a securing stage of recovery. The APFI is taking up full-time residency at the NCH as all the subsequent effects of Dante’s cancer are still an ongoing battle. In this regard, we continue to appeal for your extended generosity. By dint of your past willingness to give, Dante continues to carry the day. You’ve given him the greatest likelihood for survival. May your continued generosity supply the push he needs to complete his next stage of healing.

During our visit with Dante I had the pleasure of meeting Neil Claudio, CME-Pedia Division, of Natrapharm, Inc. which is a pharmaceutical organization based and operating in the Philippines. It is engaged in the marketing and distribution of pharmaceutical products acquired through licensing and supply agreements with national and international companies. I’ve learned that the group is one of the fastest growing pharmaceutical organizations in the country. Ranked 10th in the Philippine Pharmaceutical Industry’s ethical segment, it is also the 2nd largest national pharmaceutical company (ethical segment) in the local industry. Natrapharm, Inc. has been a solid supporter for the APFI since jump street. The APFI is fortunate and thankful to have both the support and association of the group.

After meeting with Dante, the gifting began. I must admit, on a personal note, having spent time away from the NCH and then revisiting, the important thing to remember is to face every child and parent with sincere conviction. It’s no time to suffer from a mental recession as clearly they are enduring painful times- but the psychology cannot be as such. I sense that every APFI volunteer learns this. We are dealing with the pain of a parent’s worry. And although these children may not burden their state of mind to be fearful about their own suffering and about their future, it is still necessary to be steady in their crisis. I suspect that it’s about getting both hands on it and handling with care.

After the gift-giving of various hygiene products made possible, in large part by the generosity of Natrapharm, volunteers began in distributing food around the various wards. Feeding fellow souls is always a tremendous act of closeness. I think that every volunteer feels fortunate when participating. As volunteers we are all blessed to be able to help enact what is becoming a beautiful and rewarding practice of the APFI.

When the day was done we made our quiet exit. And As far as birthday celebrations go, maybe this day marked the outset and celebration of a woman’s self-appointed obligation; be it both Arnel’s and Cherry’s passion. Whatever the indication, it is the mission of a husband and a wife now enacted by the people who desire to help. In my short time with the APFI, I am proud to be working alongside volunteers turned friends, and friends turned family; and people who truly believe in the duty and measure of their work as in the end, this immersion is only about our children and their wellness; the children who suffer at the NCH and in every children’s hospital.

I think that it should never be an implicit assumption here that children are admitted to hospitals like the NCH to stay, and not to come and go. A child’s spirit should never be broken. But it is the stark actuality for many. And for the children of the NCH, an ounce of prevention never equaled a pound of care. Their circumstances are beyond that. So for their welfare, may we always strive to do more. Many, many thanks to our donors; once again it is through your desire to restore our children’s health, spirit, and wholeness that we are blessed with the duty. To our donors: your giving is nothing less than an unselfish act of heart and heroism on a grand scale. It matters profoundly.

MORE PHOTOS by volunteer Justice Flores at the site gallery. Thank you!