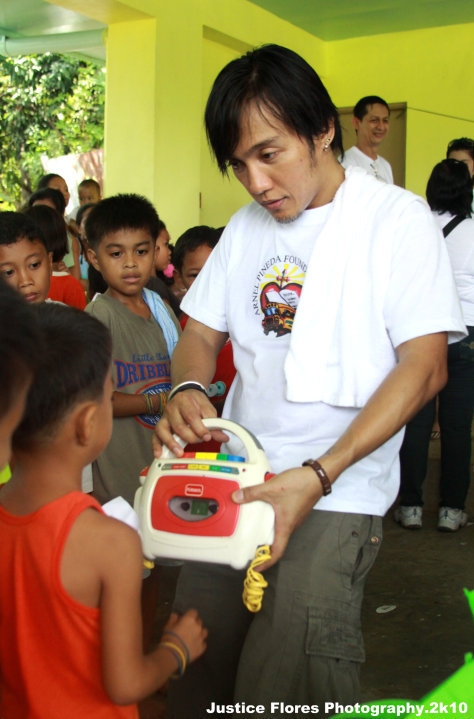 The vision of the APFI can be described as a fight to retain a child’s dignity and self-worth. It is an extension of heart. Donors and volunteers would adopt this purpose and intent. And as projects for the poor and displaced were conceived it wouldn’t take long for people to respond and to help establish the aim and to see to its growth.

Misyon: Edukasyon: an attempt to overturn a declining way of life; in a place where youthful aspirations are fleeting and the eventualities of boys and girls can be easily guessed. On Sunday, June 20, 2010 volunteers returned in commonplace to Sitio Bakal Barangay, Bagong Silangan, Quezon City. A few moments for pleasantries and it’s down to brass tacks.

With the media on hand Arnel would share his convictions. It’s a decision to spotlight education in underdeveloped, back alleys of society where skid row is a child’s hideout. The goal would be to refocus on “Street Children” and the commiment to their welfare; children with no capacity to steer their own path out of poverty. A combination of humanitarianism and education. He expressed that if he could sway even just a handful of “Street Children” for just an hour at a time with the goal of teaching them the value of a continued education, it would be a start. Arnel longs to bring education to children who retreat to depressed, rundown areas of town where life is often devalued and a child’s imagination can be weakened to utter emptiness; to scour the detached, reduced areas of town where idle hands become the devil’s tools. It is here in this respect and in this breath the APFI will begin its work. It’s but a drop in a bucket to some but the beginning of remarkable achievement to others.

The outlook consists of personality development; to teach our children morality. To communicate the qualities of righteousness, what it means to be of noble character; to cultivate integrity and to teach virtuous behavior amidst immoral and coarse surroundings- to keep the moral perversions at bay. It is an attempt through education to give a child the ability to look at their lives with a fresh pair of eyes when their souls may very well be on the verge of distortion. It is an attempt to provide a child a level playing field. And isn’t this an inherent right for all our children?

I’ll forbear the usual blow by blow- but funny how the most compelling moments can occur at the most plodding of times. As the day wound down Arnel and Cherry would engage in fitting every child with new slippers. One by one, the kids fell in line and patiently waited their turn to receive their pair as Arnel and Cherry would crouch down and happily settle in for the chore; but as one might imagine, the deduction is that to them it wasn’t a chore at all but rather the natural, expected act of a parent. Profound to me. It is a modest act of service with no other way to be performed but with a humble attitude. So If you couldn’t be there in person I hope you can appreciate why I label it significant.

Come Monday and I was caught in a familiar storm of what to write and what to share. The hardest part is navigating the tumult with grace and then talking about what really matters most. And so I thought for just a moment…I imagine a child could get tired of bracing him or herself for a hero’s rescue. Day in and day out…lamenting over what, reflecting on what, with little to look forward to and little reason to dream. Can you picture your childhood years without a hero or heroine? A childhood absent of parents and family, friends you made at school? A child of the streets…waiting for what… If you ask Arnel, you may never meet another who wears the “cape” of his own success so lightly. If you ask “him” what matters, it’s not to do with him. So what should matter?…If you develop a foundation, it’s useless if nobody knows to build on it. Spreading the word is what matters most now.

Special thanks once again to all the donors and volunteers for putting our children first- in your giving you become people of value…you save lives.

It’s been said that he who saves a single life saves the world. May the APFI save the world too many times to count. In endeavoring to lift our children to prosperity and virtue, I believe the efforts of the APFI will achieve both.