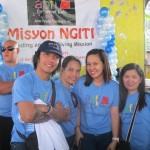 How does one celebrate the first year? Toddlers usually get treated by their parents to their first birthday party, while married couples often go out on a special date.

Organizations usually hold exclusive celebrations for their members to mark the special moment. The Arnel Pineda Foundation Inc. (APFi), a non-profit organization aiming to help children of struggling Filipino families, did just that, with a somewhat different twist: they included 100 school-going children of Barangay Batasan Hills, Quezon City and made them the focus of its celebration.

The anniversary rites were held at the covered basketball court on Saret Street, Barangay Batasan Hills, Quezon City at 9 a.m. on Saturday, March 12, 2011, in cooperation with the barangay council headed by its chairman, Rannie Ludovica.

“We’re aware of the problems and hardships you’re facing,” rock singer Arnel Pineda, the APFI chairman, told the children and their parents in Pilipino at the celebration. “While we won’t be able to solve them, we’re here to make them easier to bear.”

Tita Amor kept the children and their parents amused with a show and tell number consisting of vertical balloons twisted into various shapes.

The excitement was further heightened by a relay race and song and dance numbers in which the children took part. These were capped by conversations with a puppet named Kiri, Tita Amor’s “best friend”, and magic tricks usually performed in long sleeves but done instead in T-shirt and overalls.

On its first year, APFi conducted various relief missions providing children of struggling Filipino families in Metro Manila and other urban areas with various forms of support, ranging from school supplies to instruction in basic hygiene and special care for hospital patients.