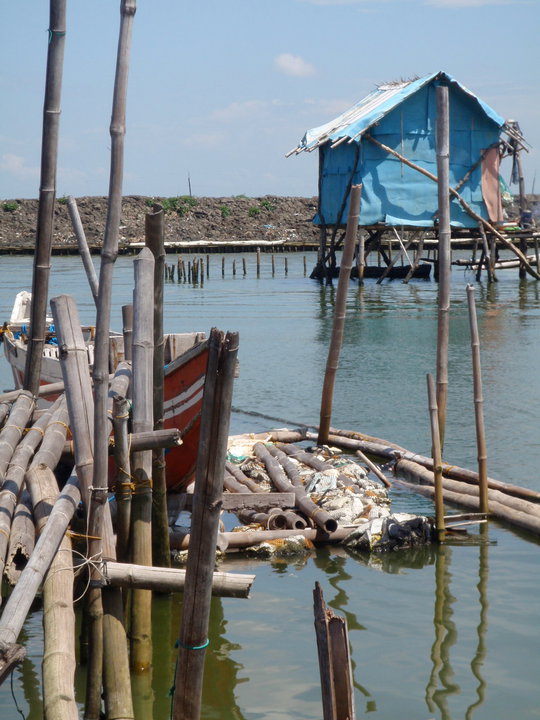 When Cherry Pineda, wife of Journey frontman Arnel Pineda and chairwoman of the Arnel Pineda Foundation Inc., asked me if I know a place where we can hold a medical-dental mission, I queried back what could be her criteria in choosing the area of mission. With her usual concerned and sincere look, she quipped, “depressed, no-access to medical care… forgotten”.

Her sincerity in uttering the last word striked me and pushed me to mentally browse among all the places and areas I have visited that are stored in my memory. And then suddenly I thought of a place that I visited during one of my lowest moments in 2007 and wherein my two days of stay there made me realize how blessed I am. The place was so poor and depressed that anyone who can afford to go to school, eat three times a day, have job options, enjoy the comfort of having access to basic services will feel blessed and lucky that he has not to live in it.

The place is Barangay (Isla) Pugad – a twenty five minute boat ride (aboard the Barangay’s mobile/patrol-cum-ambulance service boat) from the progressive town of Hagonoy, Bulacan. It is a far cry from main Hagonoy proper not only in terms of distance but of progress and everything that connotes development.

When I told Cherry about it, she opted to see the place. And so, unintentionally coinciding with the first year anniversary of the Ondoy tragedy, we drove to Hagonoy first hour in the morning of September 26, 2010. After an hour and a half drive, we reached main Hagonoy and rode the Barangay service boat waiting for us at the ‘pondohan’ at the back of the town’s market place.

The boat ride provided us the sight of the town’s outskirts that boast of numerous ‘pondohan’ or ‘consignacion’ (mini fishing ports), even several satellite gasoline stations along the riverbanks. But after several minutes, the boat seemed to be taking us away from civilization and bringing us to a seemingly endless river surrounded by fishponds, baklad, pilapil, swamps — but lo and behold — no more sight of any settlement or community. It was only after exactly twenty five minutes that we finally saw an island full of coastal houses, some partly submerged in water – a community obviously poor, and yes, isolated.

Several Barangay officials and lady volunteers warmly welcomed us and gave us a quick tour of the island. The pilapil-like walkways of the island which are usually wet and muddy, connects the numerous lines of dilapidated, improvised shanties that are homes to 517 families with total population of 2,056. The barangay chairman told us there are actually 384 houses in the island, mostly barong-barong made of worn out bamboos, rust-laden GI sheets and tent materials.

But the story of Pugad is not in the poorness of its shanties but in its residents who are deprived of so many basic things including education (elementary/primary school only), absence of job opportunities (aside from fishing), clean and potable water, communication lines, sanitation (not all houses have comfort rooms), proper waste and garbage disposal, health care, and ISOLATION.

The island is witness to the many heart-wrenching stories of poverty – of families eating only once a day, sick residents dying due to inaccessibility to medical care – even that of common ailments like simple flu on children usually result to death, pregnant women giving birth while still on boat, teenagers not being able to go to high school because school is an hour-boat ride and forty pesos away from their island, their houses and meager possessions submerged in water during high tide – even worst during typhoons, all these and more – stories of survival and basic human existence.

Obviously, Pugad is not a nurturing nest for its poverty-stricken populace but a depressing island for its people deprived of the many basic things in life. Even the local government finds it too far for comfort. Indeed, it hosts many broken dreams.

If only each one of us can extend a hand, we might bridge the distance and get the blessing across. Because on a deeper analysis, its distance may have isolated the island, but it is our indifference which isolated its people.

So, APFI being true to its mission of reaching out to the poorest, most forgotten of our fellowmen, will hold its Misyon Kalusugan Grande sa Oktubre on October 17, 2010 in Barangay Pugad, Hagonoy, Bulacan which will be dubbed OPLAN: ISLA PUGAD.

APFI will bring volunteer doctors and dentists to care for Pugad residents who need medical and dental attention. The Foundation will also bring medical supplies for the island’s health center, distribute grocery packs and health kits to residents and school/gift packs to children.

It is our hope that we may touch lives with this mission. It is our statement that no place is too far, and that no person is unimportant as all is equal in the eyes of God. Everyone deserves a better life. Each one of us is bound for a greater purpose.

Limited resources compel children to educate themselves in this poorest barangay in the Hagonoy municipality. Click on image to view more photos.