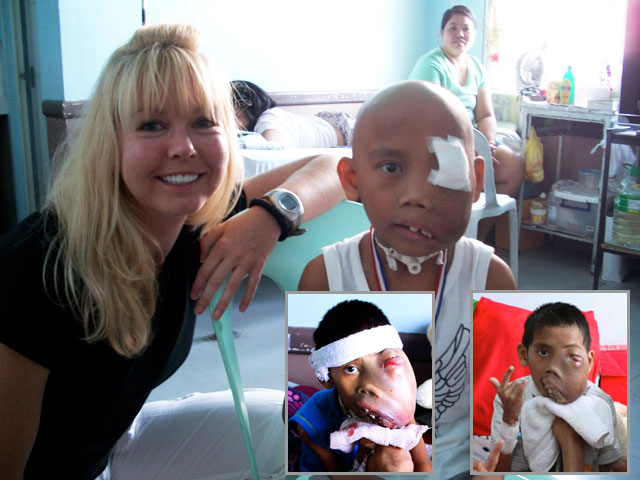 In the latest visit to the National Children’s Hospital (NCH) in Quezon City, Philippines, APFI volunteers Miles Casala, Jo Colgrave, Matt Robertson, Kelle Llorera and myself were overjoyed to bear witness of the wondrous transformation in Dante Riello’s condition. In just over a month’s time, we continue to see miraculous improvement. If you recall, his condition after the discovery of a tumor just eight months ago had become increasingly poor and heavily disturbing. And yet despite his own failing condition his spirit and attitude remained hopeful and positive. Upon seeing him again, we were avowed; what was once heartbreaking despair was now an unimaginable example of fortune and hope.

We all had a moment to spend time and be with him. At one point, Jo sat alongside Dante for awhile when he leaned over to her and asked unprompted, in his own impulsive words of affection,”Where is Arnel?” He asked in Tagalog as Jo made haste for translation, “I want to tell him…Thank you.” Jo mused as one could imagine; how his instinctive words of thanks resonated with her. We cannot thank our donors enough for the immediate and continued support in light of his story. We know that Dante still has a long road ahead as his comeback from dire straits is far from over. But we have reason now more than ever to believe that Dante will show us all why he never gave up.

When we first arrived at the National Children’s Hospital we made the acquaintance of one Stephen Domingo, a likable man who also paid a visit to the NCH. His purpose for being there was as he described “his turn” to celebrate his birthday with the children of the hospital. He explained that some time ago a friend of his also held a birthday party in the hospital, invited close friends and acquaintances alike, with the message and hope that others might follow suit and that when it came time to celebrate their own birthdays they would do so in similar light with the children of the NCH. The idea here holds a unique and ironic twist, I thought – as the birthday celebrant becomes the one who “gives.” And in a gracious reversal of roles, the birthday celebrant here is the one who imparts joy and laughter into the lives of all the children who are present. The party played host to gifts, food, music & dance, and even a surprise visit from the “Jollibee” mascot. Interestingly enough our gift-giving project would be scheduled the day of the party.

We quietly excused ourselves midway through the festivities. Following the lead of Hospital Administrator Remy Serapion we proceeded to make our rounds through the various hospital wards delivering items that we packed the night before; gifting “hygiene-bags” filled with toiletries, kid’s clothing, stuffed animals, toys, roller skates, blow-bubbles, stickers and more.

Keeping in mind the big picture we came to learn of Gabriel Ronsario, diagnosed with “Kawasaki Disease,” Raymond Bondoc, Marilyn Espanol with Beta Thalassemia, and one year old Naisis Villanueva diagnosed with a tumor. Of these, our most urgent of matters involves Gabriel Ronsario, admitted April 9, 2010 suffers from “Kawasaki Disease,” or “Lymph Node Syndrome” where if not treated within approximately ten days of onset, serious heart complications become but a foregone conclusion. Gabriel has our attention. He requires approximately 9 vials of “IVIG.” It demands our immediate attention because the Medicine vials are only available here through Cavite. The cost of one vial is PHP8,950.

Dante Riello is currently scheduled to undergo “Radiation Therapy” or “Radiotherapy.” We await word regarding the anticipated duration of treatment. Dante’s remaining Chemo sessions are also pending forecast. “Raymond Bondoc” is still awaiting an official prognosis regarding his stage of cancer. The oncologist will inform us what course of action we can expect.

Many thanks to all the donors and volunteers of the APFI. Together our ongoing work continues to advance and evolve.

CLICK HERE to see more photos of the NCH visit