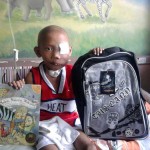 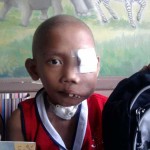 May 23, 2010: While doctors and hospital staff continue to manage the mire of Dante’s recovery, APFI volunteers Rosie Peña and Kelle Llorera found time to join in a celebration of true thanksgiving as Dante turned 10. In hindsight it proved a way to maybe break the monotony of treatment, maybe even an opportunity for mental or emotional healing outside of the ongoing damage-control it seems Dante has become far too familiar.

Rosie and Kelle arrived at the National Children’s Hospital early Saturday morning and met briefly with medical social worker May Bediones for a progress report; then it was off to the medical ward. They bid Dante “Happy Birthday,” talked with him for a while, took pictures and presented him with a new black and grey colored “Tuscany” back-pack with a charmingly implicit “Rock” motif for when he’s finally ready to go back to school. And as the APFI gears up for its Street School Project in Barangay Holy Spirit, Quezon City, it seemed fitting that he received an award-winning book for his reading enjoyment; Naku, nakuu, nakuuu!; a children’s book written by Ernanie “Nanoy” Rafael and illustrated by Sergio Bumatay III; a warm story about a young boy, Isko- puzzled about his mother’s pregnancy, even terrified when he learns what happens when puppies are born. But ultimately, Isko learns good things about having a brother and he goes home feeling ready and excited about his new sibling. The book won the Silver Anniversary Edition PBBY- Salanga Writer’s Prize and the Alcala Illustrator’s Prize at the National Children’s Book Day in 2008. The illustrations also won an Encouragement Prize at the 16th Noma Concours for Picture Book Illustrations in Japan.

Just days before, on May 18, 2010, Dante had a “CBC” blood exam, a test that gives information about the cells in blood. Later that same day, he underwent a blood transfusion for the purpose of maintaining his blood platelets, which circulate in the blood and play a fundamental role in hemostasis and are a source of growth factors.

As you can see from the pictures, the inflammation appears to have subsided even more in just the last few weeks. To treat his recurring infection in and around his mouth, he is currently taking Clindamycin.

Through Dante’s increased treatments and attention he has remained invariably steady in mind and body.

Happy Birthday, Dante! Your will is strong and the strength of your spirit will settle the matter.